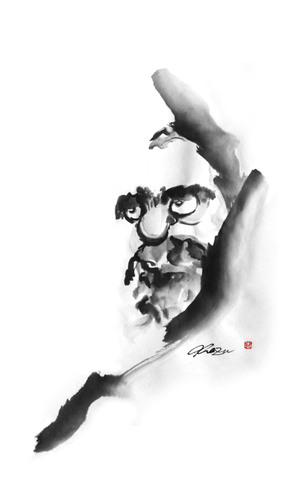 I was believing Bodhidharma was Japanese. Because I played a game called "dharma-san" a lot. This is said "tag" in my dictionary. (as always no idea for the right words) anyway, everybody knows a tag called dharma-san ga koronda. and lots of designed dharma figure coloured red are here. even I loved to have a "dharma box lunch" at Takasaki station which was on the way to the country house. It futures the dhrma face(see the link). So my image of dharma is from this box lunch and thought evry kind person like a priest in the cinema.

The real bodhidharma was not like today’s deformed one. He was very stubborn and severe. He was from India, so he got large eyes and long nose. I was surprised at Hakuin or Sesshu bodhidharma paintings because they have very severe dharma san.

1. Front neckband is the key to draw the tradional asian figure wearing kimono style clothes. I made the hard line first which was inspired by the Hakuin’s line and Sesshu’s cave rock line.

2. First, light black (more water than usual) is on the eyebrow, then before getting dry fully, put more black stroke added. So you can get some depth, profound expression.

Blow your imagination before move the brush